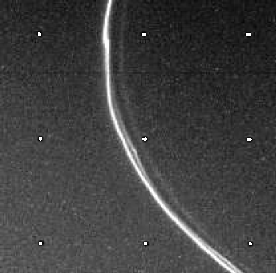 NASA’s Cassini spacecraft is currently orbiting the ring system of Saturn. It has been on an extended mission since 2008 and amazingly continues to send back advanced data on Saturn, its moons and extensive ring system. The ring system has proved most amazing as it contains myriads of ringlets, moonlets composed of dust and icy rocks. It operates as an accretion disk with primordial matter, ice and micro debris. What is most interesting is that the rings are not as stable as they have appeared.  Originally, the rings were observed by the Voyager mission when it passed by Saturn (1980-1981), but a comparison with the Cassini images has revealed great differences in almost all the rings, especially the F-ring, over the period of less than thirty years. Thus, in a relatively short period of time the vast changes in the rings have shown spectacular morphologies.1

The changes in the rings of Saturn have completely overturned the classical picture of a stable system.  The current study of the massive ring system has produced evidence of gravitational resonance, but, more importantly and stunning, is the finding of the “F-ring” having a strangely, continuously changing pattern, from helical formations to propeller-like mini-spokes. Some scientists even believe that the rings are producing small moonlets from the collisions of fragments that exist in and around the rings, especially the F-ring which exists in the Roche limit, a point where the gravitational tug from the planet could tear a larger moon apart.  Again, the rings are made of dusty ice, in the form of boulder-sized and smaller chunks that often collide with each other as they orbit Saturn. Saturn’s gravitational field constantly disrupts these ice chunks, causing, as well as preventing them from forming moons. Saturn, itself, has the most moons of any of the planets in our solar system, over 60 objects of this type, but they are mainly outside the more familiar inner ring system with just a few in the area of the A- and B-rings, more towards the F-ring, but the majority lying in the G- and E-rings and beyond. Another question is the age of the rings. They may be as old as 4.4 billion years, but if they are so old why are they changing so rapidly?  Did they always do this or is there something new taking place?

The analysis of the changing rings has become one of the most important topics surrounding Saturn over the past 7 years. Not surprising, The Keys of Enoch® proposed that Saturn would be a sign of change, revealing how we, the human race, should take a closer look at our evolving Solar system. Specifically, Key 304:11- 12 tells us: “Our sun, by virtue of being a variable star, will be seen as having great limitations for future evolutions.  This will be observable by visible exchange of the solar polarity fields and by the magnetic mapping of inner-solar magnetic lines rotating faster than the surface of the sun. These changes will also affect the rotation of Saturn. This will be seen as a periodic effect which will be noticed in the activity of Saturn’s rings. It will illustrate new changes that will take place throughout the entirety of the solar system.”2

This indicates that Saturn holds one of the clues to the next phase of our solar system’s evolutionary future. The first part of this quote was confirmed in the same words by Lika Guhathakurta of NASA headquarters in Washington DC that our sun is “a variable star.” 3  Thinking like that was unheard of before 2010 when observations of variations in the sun’s magnetic field were noted by NASA. Additionally, some research scientists (e.g., MGS MOC Release No. MOC2-297, 6 December 2001) have recently considered that Mars itself is going through climate change.4 So all planets may be experiencing some changes, it may just be more obvious within Saturn’s rings and possibly the polar regions of Mars. 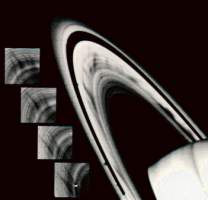 It is fortunate that we have a 30-year comparison made by Voyager (1980-81) from colleagues at JPL and the team of Dr. Jim Warwick in Colorado.  So why are the rings revolving and changing into strange patterns? Theories still abound. The answer to these deeper questions may lie in the nature of the outer planets and especially how the rings themselves seem to have rain affecting Saturn’s ionosphere.5 Saturn’s moon Rhea may also have rings around it, although this has not been confirmed. The rings of Saturn themselves although varying in width are incredibly thin, ranging from about 30 feet (10 meters) to several kilometers thick at most. The rings have slight pink, grey and brown colors due to the presence of dusty material mixed with the water ice.

A definite change in the appearance of the rings is at work. Whatever the result of the new research, keep looking upward for we are about to learn more valuable information about how Saturn’s rings, as well as how its planets and moons, are forming and evolving as a miniature solar system.